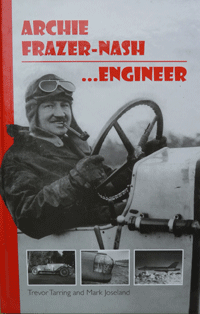 This comprehensive biography, meticulously researched and written by two past Captains of the Frazer Nash Car Club, covers Archie’s early work with Ron Godfrey on developing the G.N. and goes on to the design and production of the Frazer Nash car. Archie was very much a hands-on engineer, and the book records the design and development of the powered gun turret during the thirties and the War. Eight appendices detail his competition record, his patent applications, and projects undertaken up until the time of his death in 1965. 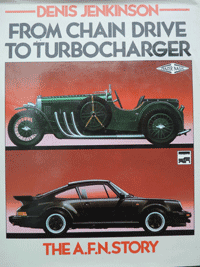 From Chain-Drive to Turbo Charger by Denis Jenkinson

John Aldington, founder of the Frazer Nash Archives, engaged his great friend and famous motorsport journalist, Denis Jenkinson, to write a history of A.F.N. Ltd. ‘Jenks’ was given full access to records at the Archives and two years later ‘From Chain Drive to Turbocharger’ was published. This is essential reading for all Frazer Nash enthusiasts. Jenks tells the story of the early Aldington involvement with GN and Frazer Nash cars, the glory days of the 1930s, the association with BMW and the history of the firm during the War. Production of the Bristol-engined post-war cars and the subsequent partnership with Porsche are covered in full, together with portraits of many of the characters involved with the firm.

The Archives bookstore is able to offer for sale a limited number of new, immaculate copies of this book, accompanied by a certificate of authenticity and a photograph of the author. 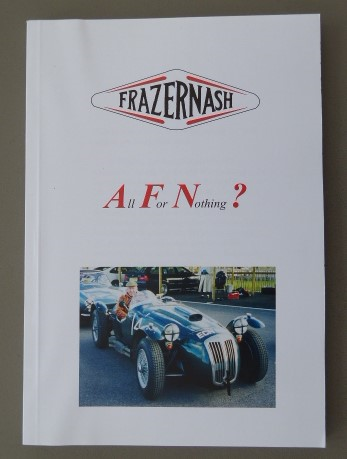 All For Nothing? by Nic Dyer

Nic Dyer started work for AFN at Isleworth in 1951 as an apprentice and went on to work on the Le Mans Rep, the Cabriolet and all other post-war models. 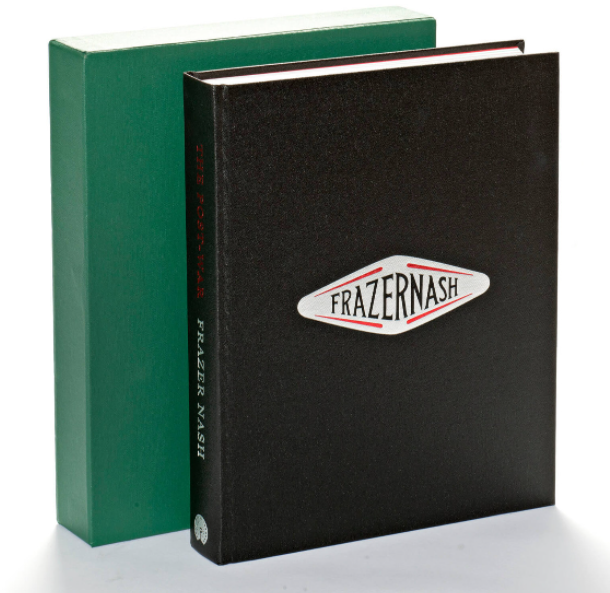 This book, in two limited editions, traces the evolution of the Bristol-powered Frazer Nash from the first prototype based on a BMW 328 that had competed in the 1940 Mille Miglia road race to the last cars that appeared at the London Motor Show in 1957-58. Early chapters recount the founding of the company, the involvement of the German BMW company with AFN, the makers of Frazer Nash cars, and the evolution of the BMW-derived Bristol engine that powered them. A fascinating and painstakingly researched Register gives a comprehensive history of each individual post-war Frazer Nash.

The authors: James Trigwell, the Frazer Nash Registrar (Post War) and Patron of the Frazer Nash Archives. As well as owning several outstanding examples of the marque, he has been a devoted Frazer Nash enthusiast since boyhood; Anthony Pritchard is a distinguished motoring writer and historian whose last book for Palawan was an authoritative history of the Gullwing Mercedes-Benz.

The following are no longer in print, but copies are normally available in second-hand motoring book shops, or on ebay.

This was the first book on the marque, and was published  by Macdonald & Co. in 1965. The book gives a comprehensive picture of both Frazer Nash and of its precursor, G.N. but does not include post-war production cars. The book concludes with a comprehensive register of all chain-driven Frazer Nashes.

In the second of his books, Thirlby concentrates more on the two prime elements of the the Frazer Nash story – the cars and the people.  He also includes more detail on G.N.

In his third book Thirlby includes new information on cars and people, whilst Tony Bancroft records the history of the post-war cars, including a Registry of all cars built by AFN.