Preserving, Extending and Promoting the History of the Frazer Nash Marque. 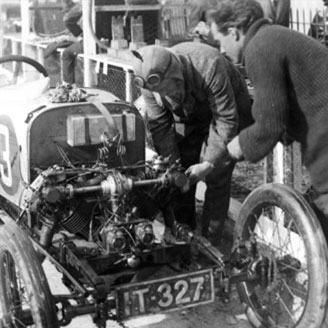 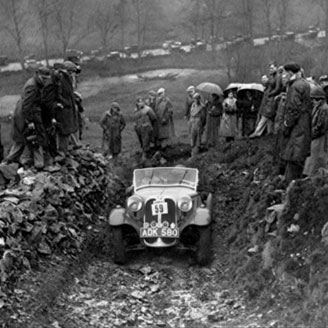 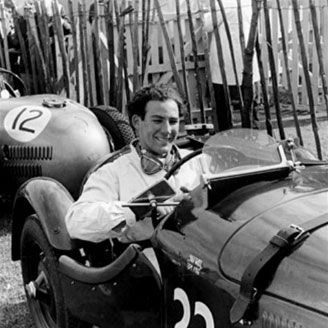 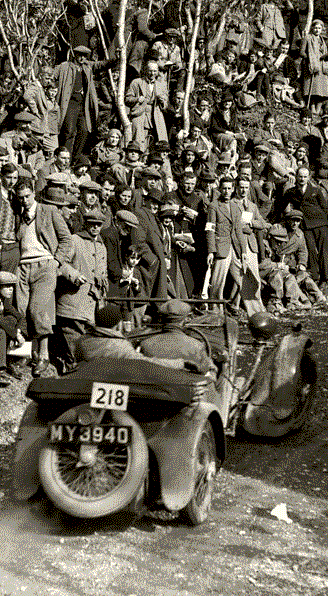 From the early 1920s until the mid-1950s, Frazer Nash was the epitome of a classic British sports car that many young men aspired to own.

The story begins way before that, however, in 1906-7, when Archibald Goodman Frazer-Nash met Harold Ronald Godfrey when they were engineering students at Finsbury College.

In this section you will find information about the People, Cars, Companies and Competitions that came to give this iconic line of sports car their legendary status.

Settle down with a cup of coffee or glass of wine and enjoy the following videos.

This first is a recording of a lecture given by Archives Trustee James Trigwell to a group of Frazer Nash-BMW owners and members of the public in 2014 during our exhibition at the Rivers and Rowing Museum in Henley-on-Thames: http://bmwhistoricmotorclub.co.uk/frazer-nash-the-bmw-connection/

Next is a documentary film made by Oliver Roblin and Bjorn Storstein. This was filmed at the Frazer Nash Archives and also on location at Coldharbour Farm and at Castle Combe. This film not only gives a brief overview of the marque's history, but also goes some way to explain the fascination of owning a GN, Frazer Nash or FN-BMW: https://www.youtube.com/watch?v=EISAuRRIWx4&t=88s

Cars
If you have a keen interest in the many models of car that Frazer Nash produced, or if you’re looking for some detailed specifications of Frazer Nash car models, click on “Cars” to see timelines of Frazer Nash’s production throughout the 20th century as well as pictures and short articles about them.

People
Inspiring people build inspiring things. To learn more about the inspirational designers, engineers and visionaries that pooled their skills and expertise to produce Frazer Nash cars, click on “Personalities”. You’ll be taken to short biographies of some of the most influential people in Frazer Nash’s history that outline how they contributed to this historic series of vehicles.

Companies and Competitions
For a broader view of Frazer Nash, and the various companies that produced Frazer Nash models throughout the 20th Century, click on “Companies”. This will take you to a timeline and overview of the various trading names of Frazer Nash and how they evolved into one another over the last century.

We hold the official collection of documents, photographs and items relating to the history of the Frazer Nash marque. Work is ongoing with the indexing, scanning and collating of the many thousands of items that are held. Contact the Archives to find out more about the cars, the people involved, related topics and the history of the Company.

The Collection covers the following areas:

WHY NOT SEARCH OUR WEBSITE FOR EXAMPLES OF OUR COLLECTION

The Frazer Nash Archives actively works to promote this history of the Frazer Nash and GN cars.  The latest news and announcements about our activities and collections can be found here.

ALL THE WAY FROM CANADA

A pair of competition tankards that were awarded to A.F.P. Fane, a stalwart supporter of Frazer Nash and who raced both chain drive and FN-BMW cars in the 1930s...

The Archives was contacted a few weeks ago by Leslie McGibbon in the United States who was making an enquiry regarding his grandfather, Reginald William (Bill)&...

CLEMENT ENGINE RUNS FOR THE FIRST TIME IN 110 YEARS

Photo: The Clement engine, fitted to a period bicycle and nearly ready to go.? There hasn’t been much activity on the Archives front for the past ...

The Archives are delighted to announce that James Trigwell has agreed to become Patron of the Trust. Having written the definitive book on the Post-War Frazer N...

The Archives 1951 Le Mans Replica formed part of the Frazer Nash display at the Chateau Impney Hillclimb a couple of weeks ago.

The Frazer Nash Archives will be holding their Open Day on Sunday 18th August.  Any enthusiast interested in Frazer Nashes is welcome to come along at any ...

It is with much sadness that we announce the death of our Patron,  Alastair Pugh.   When the Frazer Nash Archives was established as a Charitable...

ARCHIVING WORK RAMPED UP THANKS TO HENLEY ARTS SOC VOLUNTEERS

Photo: Henley Arts Society Volunteers hard at work John Aldington donated his collected Frazer Nash and AFN possessions to the Archives when it became a regi...

FANE AND THE SPITFIRES OF THE PRU

Earlier this year the Archives were contacted by Tony Hoskins of Kennet Aviation Ltd, enquiring about information on Fane.  Tony has acquired and brought...

SUNDAY 29th JULY 2018 The Frazer Nash Archives will be holding their Open Day on 29th July.  Any enthusiast interested in Frazer Nashes is welcome to co...

HOW A FRAZER NASH CLUTCH WORKS

When the Trustees were confronted two or three years ago with the prospect of putting on a dedicated three-month long FN display at the River & Rowing Museu...

A number of Frazer Nash enthusiasts visited the Archives for the annual Open Day on August 13th.  An exhibition had been prepared including many of the pho...

"READ ALL ABOUT IT!"

If you do not subscribe to Classic & Sports Car magazine then rush out and buy a copy of the June issue which is on the shelves NOW. Simon Taylor's&n...

Photo: HARD AT IT!! Calling all Helpers ... Our next "working" day at the Archives will be on Thursday, 13th April, from 10am onwards at Henley. Ev...

We have received a very kind donation from Club member Keith Bowman, comprising a letter to him dated 3rd February 1965 from GN Ltd, a box of "GN" saf...

SORTING THE ISETTAS FROM THE MANURHINS

Despite a forecast of snow, volunteers arrived at the Archives on Thursday, 12th January for another working day to help with sorting, indexing and data entry o...

NOT JUST ABOUT CARS!

A NEW TRUSTEE JOINS THE TEAM

The Archives starts 2017 with a new Trustee on board. Welcome to Matt Vincent, a Frazer Nash Car Club member who has been most supportive with help at the Archi...

The Frazer Nash Archives is pleased to announce the launch of its new website. We have been working on this site to provide a sample of the resources that we h...

CUPS AWARDED TO MICHAEL BURN DURING THE 1950S

The Trustees are extremely grateful to Club member Jonathan Rose who brought to the November Working Day a number of cups that he had recently acquired and whic...

THE FIRST GN EVER SOLD

A photograph recently sent to the editor of the Chain Gang Gazette, the Frazer Nash Car Club’s magazine, has created quite a stir. This particular GN was ...

The first edition of Trevor Tarring's important work on the life of Archie Frazer-Nash sold out quickly.  It is an excellent read, full of interesting ...

A tremendous turnout of well over 100 visitors, many in correct cars, attended the Grand Re-Opening of the Archives last month. There were Frazer Nashes (of cou...

In 2013 the Trustees embarked on some major works to the Archives. The two small offices and the adjoining corridor on the ground floor were knocked into one, p...

Since John Aldington’s death in 2007, the Archives continued his work in regaining control of the Frazer Nash trademark. The mark had been registered to P...

All proceeds from the sale of items are used to support the running of the Archives and the work carried out to conserve and protect the material held within the collection.

You can purchase any of these items by contacting the Frazer Nash Archives directly.

First, what are you looking for?